They say that you should always show love to and/or support those who do the same for you.

Well, there’s been quite a few people in my corner; but none who have pushed me as much and as tough (lovingly) as my little brother from another mother, Jalen. Over the years he’s been consistent in his support (and his wise words to cheer me up and push me forward), even through the major distance between us, and I can only hope that I’ve been the same when it comes to him and all of the things that he has done and hopes to do.

He’s a DJ/R&B-Boy (Singer and Rapper)/Dancer/Writer/Actor and I am certain much more as he has his hands spinning gold in just about everything it seems.

About a month or so ago I made mention that I wanted a personal mix when he posted about providing them (for a fee of course) and said that I would love one for my birthday. Naturally, I FORGOT, but he reminded me about a week or so before my birthday and inquired about a list of songs I wanted.

I provided said list, let him know that he could do as he pleased, add anything he wanted and he let me know he would be on it.

Well, I received that mix tonight and let me just say that I AM GETTING MY LIIIIIIFE! I don’t know what kind of magic is in this young man’s hands, but baaaaaaybeh *thick Louisiana accent*, I feel BLESSED. 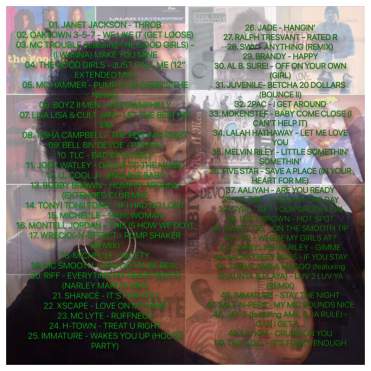 I’m only an hour in (there’s THREE total) and the entire time, I’ve been like …

I will be a zombie at work tomorrow morning, but dammit, I’m ALIVE AND WELL tuh-night *Bernie Mac voice*!

Him beginning with Throb was so unexpected. It wan’t even the first song I put on the list, but child … did my Janet loving heart APPRECIATE IT. And YES, I turned into one of the kids and danced for my LIFE. Cut to me tootsie rollin’ deep in my living room like,

I know my neighbor is mad, but that volume went to 100 IMMEDIATELY. Also, I can’t even begin to say how glad I am that he was able to find a lot of the songs that I wanted, because a good deal of them probably haven’t even been heard regularly since they were initially released (quite a few of them actually only album cuts).

I’ve been tweeting my reactions as I’ve been listening, and I think that thus far my favorite transitions have been the ones that led into Just Call Me by The Good Girls (1992) and The Feelin’s Right by Tisha Campbell (1993). I can’t even explain the guttural screams and the way I threw my invisible ass in a circle a couple good times within a matter of two seconds. It happened again when Jody Watley told me to Dance To The Music (1991). And I’m not ashamed, because I feel every bit of this mix in my soul.

My brother/friend is one of the dopest DJ's I know, and he made me a birthday mix.

And bitch … from the opening song… LIFE.

And… as I type this… the way a spirit filled me as I swear I heard a light mix of MC Lyte or Roxanne Shante (I might be wrong) thrown in just before he dropped NICETY by Michel’le (1989) right after muh’fuckin’ RUMPSHAKER.

And then, You Gotta Be Real by MC Smooth came in kickin’. Whoo… y’all can’t see it, but excuse me while I step away to collect the last half-inch of my hair he’s trying to snatch so effortlessly.

Baby, I won’t even tell you about the rest (because I’ve been in a SHOOKEN state and catching the R&B version of the Holy Ghost this entire time and it’s not over yet)… just know, this is the ONLY type of HEAT I will tolerate down here in Louisiana. Exceeded my expectations GREATLY (as I knew he would).

Once again, I want to say thank you Jalen, and THANK YOU for remember and thinking to ask me because I was going through something and this was just the pick me up I needed. Spirits totally lifted, and I love you for this MAGICAL BLEND of MUSIC! I’ll be bopping forevaaaaah.

You all can find, check out, and get to know Jalen on/at all of the links I will provide below. A cool, young and fly guy with a super dope style all his own. I can assure that you’ll enjoy any and everything my fellow Old Soul has to offer.

He also provides custom mixes, which you can inquire with him about if you wish to have a bomb ass mix of your own. Trust me, go and get your life! ✌✌